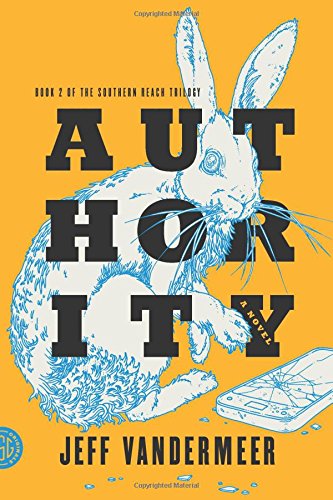 Alrighty, guys. I’m continuing the Southern Reach Trilogy by initiating ‘Authority’ (Book 2) as the successor for the MGO Book Club. Not only because it continues what we read last month, but also because it reads completely differently. We will continue to learn about Area X, as well as more about the Southern Reach itself.

What we’ve read so far…

So, in the first book we were reading from a journal. We followed the Biologist into Area X, and found out some pretty crazy stuff about the topographical anomaly or “Tower” (Tunnel), the Lighthouse, and the moaning monster in the swamp. We found that Area X is “hiding” something in the molecular structures of everything contained within it, and we also came face to face with ‘The Crawler’. Now, with the brightness still contained within her, the Biologist has headed towards the outlying island where she believes her husband may still be alive.

Obviously the Southern Reach kept out some details when hiring for the expedition into Area X, even though it’s just as obvious that they don’t have all the details to give. The Psychologist had more answers, until she freaked out at the lighthouse and committed suicide. So now it’s up to the Biologist to find out what makes Area X tick, if she can even survive to make it to the island.

What we’re about to read…

The first book read as a journal, but the second book, ‘Authority’ does not. It reads more in the lines of a spy novel. You will now be thrown into a secret government agency, following a man who calls himself ‘Control’. He’s been assigned as the new Director of the Southern Reach, and his job is to root out all the secrets that lie within, and take hold of the crumbling agency. Unfortunately for ‘Control’, the answers may not be easy to find or understand, and his own secrets are starting to catch up to him.

Why should you read ‘Authority’…

Because it’s good fiction, that’s why. 😀 Seriously, though, this is just as good as the first book, if not better. It’s written in a different style, and comes from a fresh perspective. In this novel, WE are ‘Control’, learning things about Area X that we may not have understood in the first book because of the secrecy of the Southern Reach. We really get into the nitty gritty with this one, and it’s definitely a wild ride.

You can pick up ‘Authority’ from your local library (like I did), or purchase it on Amazon or another book retailer near you.

I’m currently on book 3, which I’ve slated to be the book for next month to round out the trilogy. In early April, I would like to schedule a livestream discussion on the book for anyone who’s interested. Email me at tara@mygeekobsession.com, comment down below, or hit me up on social media (Twitter/Facebook) if you’d like to join a virtual book club meeting with casual conversation and theories on what has happened to the Southern Reach, Area X, the characters, and more!