I’ve been sitting here trying to find a good way to start this article. Unfortunately, my brain has melted due to the WTF factor in everything I’ve been reading on this. It all started with some bears.

Specifically, these guys. We all read these books as a kid. But do you remember how it’s spelled? If you remember it as ‘Berenstein Bears’, you are absolutely, positively wrong. And so are many, MANY other people. It’s actually ‘Berenstain Bears’, but if you remember it as “ein” instead of “ain”, this is apparently proof that you are from an alternate reality, aka a parallel universe.

Now, stay with me on this, because although you may believe it to be some harebrained conspiracy theory based on a false memory of bears, it goes much deeper. Clearly remembering something one way, but the reality is another actually has a name. It’s called, “The Mandela Effect“, and it gets its name from another incorrect memory people have of Nelson Mandela. Some people clearly remember (not just assumed, but actually remember reading/hearing news stories and whatnot) that Nelson Mandela died in prison in the 1980s, not in 2013 as our current reality holds true.

To quote Wikipedia on the Mandela Effect:

The Mandela Effect is a colloquial name for an instance wherein a group of individuals all mis-remember the same detail or event.

Now, if you visit several sites (including Reddit’s forum on the effect), believers in this theory hold that there is an incredible difference between a false memory and the Mandela Effect. It’s the difference between believing something to be true, being shown the correct information and then going, “Oh, ok, I kind of remember that. I guess I forgot about that, ” and distinctly remembering something, being shown the “correct” information, and it looks/sounds completely foreign to you. There’s a whole list of them on this website, and I gotta tell you, there’s a few that intrigued me. But, this goes even deeper.

One of the biggest claims in the ‘Berenstain’ controversy, and belief in the Mandela Effect as a whole, is that if you are experiencing the effect it is completely possible that you are from a splinter of a very fragmented timeline of parallel universes. Although this claim sounds crazy, and could have some huge implications, it is not completely unsound. Even the greatest minds of our time talk about split timelines and multi-universe theory.

While Stephen Hawking in the video above pokes fun while talking about “One Direction” and Zayn, he still mentions the fact that there are multiple universes. It’s specifically called, “The Many Worlds Theory“, and it’s closely related to Schroedinger’s Cat. Basically, for every event or small action there are various different outcomes. You pick one and move on, but that’s just one reality. In another parallel reality, you chose the other outcome, and moved on in a slightly different direction. Therefore, the timeline splits, and multiple realities are created “a la” the Zelda timeline, or ‘Back to the Future‘, leading to things such as Quantum Suicide, a perpetual spiral of either killing oneself or not. Unfortunately, there are no solidly scientifically proven examples of this actually happening. One of the few “proofs” we have is the Mandela Effect, which is very loose and can be written off as misinformed or misremembered.  You’ll also have to keep in mind that the Mandela Effect, though related, is completely different than a Glitch.

Yes, a glitch. As in “a glitch in the Matrix” (see examples here). If you’ve seen the movie, ‘The Matrix’, then you know exactly what this is about. If you haven’t, here’s a brief description of an actual “Glitch“:

A glitch is a short-lived fault in a system. It is often used to describe a transient fault that corrects itself, and is therefore difficult to troubleshoot. The term is particularly common in the computing and electronics industries, and in circuit bending, as well as among players of video games, although it is applied to all types of systems including human organizations and nature.

In the movie, “The Matrix”, a glitch is what causes deja vu, or things to suddenly change. This leads me to the biggest twist that I’ve found in researching the past few days. If you haven’t clicked off of this page yet and you’re still reading, you may just do that with what I’m about to write next. It is possible that we are not biological at all. We could, in fact, be a simulation.

Bam! Didn’t expect that, right? Well, maybe you did, because it’s definitely been on some people’s minds since the “Matrix” series came out, but mostly as a joke (THERE IS NO SPOON!). However, there is a scientific paper that was published back in 2003 (four years after, “Matrix”, btw) that surmises that there is a possibility that we are a sentient simulation of a posthuman race (our future) that is run to study the ancestry of the human race (us). So, we could be sims playing Sims who play Sims… basically. I’ll just call it “Simception”. The implication of this is that all of our “Gods” are actually a posthuman race simulating us, and they are the biological ones while we are the simulation. THEREFORE all religions and races would actually be from the same program and hyper-advanced posthuman operator(s) that run the simulation known as Earth and humanity, and we’re just running around trying to figure out what life is all about while some super smart, highly advanced future race of humans watch us fill a room with chairs and burn down our house. 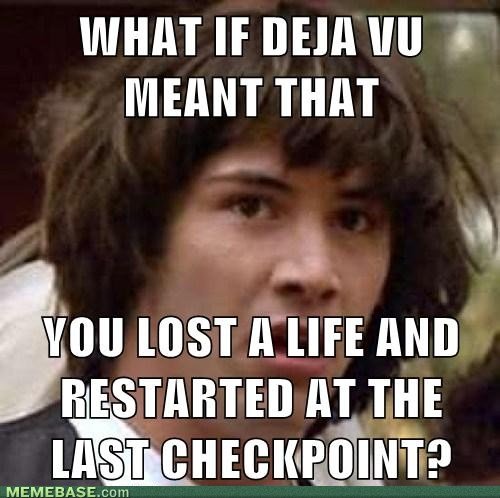 So, maybe it was “Berenstein Bears” at one point. In another simulation. When it got copied and resaved, the creators just renamed it to “Berenstain Bears” as if it was always that way, because maybe that’s how they meant it in the first place and they just fat-fingered it. A glitch in the simulation just causes you to remember the previous save. Sounds like these posthumans need a better QA department.

What’s your take? Do you believe in the “Mandela Effect”, or is it just another crazy conspiracy? Are we living in a simulation? Sound off below! (Keep in mind, every link in this post leads to an article or picture related to what it’s hyperlinked to. Have fun, but don’t melt your brain!)