Ah, 2015. You’re almost over. There’s been a lot of fads that have come and gone, and there’s one in particular that has pissed me off relentlessly throughout the year. (FYI it pained me to even type out that title.) Honestly, it started WAY before 2015, but it seems like ‘Clickbait’ titles have spread tremendously, even affecting ACTUAL news articles. It’s gotten to the point where that’s all I see in my social media feeds. And yet, they still get clicked, by hundreds of thousands of people.

WIRED put out an article a few days ago outlining the psychology of clickbait articles and why on Earth we keep clicking on them even though we hate them. In short, it has to do with anticipation, emotion, curiosity, and the fact that we like lists. It’s like an online game of truth or dare. The article is daring you to click it, and just like that we’re hooked. They fill us with hatred when we see them smattered across the internet, delight when we sate our curiosity by reading the article and filling in the missing puzzle piece left out of the headline, and shame when we realize we’ve clicked on another one.

Headlines, however basic or clever they may have been, used to be comprised of what was in the article: 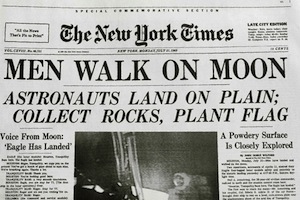 In my opinion, there’s nothing wrong with these headlines. They tell you exactly what happened, or at least allude to it, and you read the article to find out more. None of this, “you won’t believe” or, “she cried when” or, “ten things they don’t want you to know about” kind of bull.

Why so much clickbait?

I guess in this world of multiple news outlets, getting a headline that people will click on is more difficult than it was to get people to buy the paper. Of course, many clickbait titles don’t come from mainstream news media. They come instead from entertainment sites or advertisements. While people were mostly annoyed but understood this, it became more of a problem this year when I started spotting more NEWS outlets using clickbait, therefore making it harder to tell the real news from the ads and entertainment.

It’s really easy for me to pass up, “You won’t believe what Kim and Kanye named their baby!” but I actually do want to know more about, “Look What This Applebee’s Server Did When He Found $32k“. It just ticks me off that it’s worded in clickbait rather than, “Applebee’s Server Finds $32k, Turns Money Into Police”. I would still click that, just to find out how in the world this server found $32k.

Unfortunately, that’s not the world we live in right now. So have fun finding out these two simple tricks to clean your home, because you’ve been using your vacuum wrong this whole time.